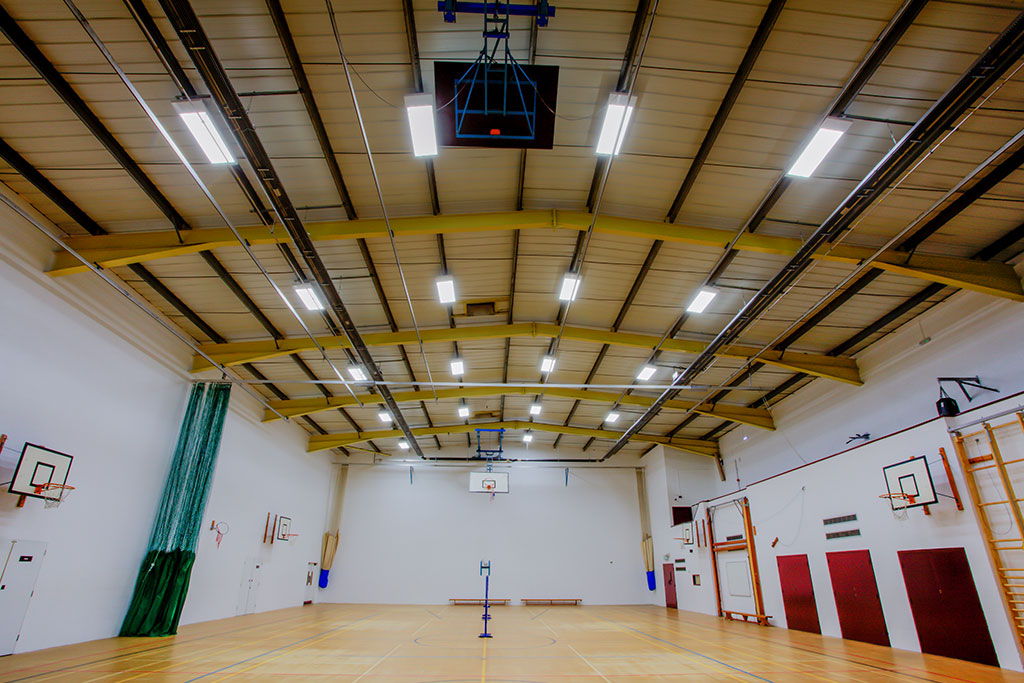 Ashville College is an independent day and boarding school founded in 1877. It is situated in Harrogate in the North of England.

In the interest of further supporting and enhancing the sporting experience for its student population, the college wanted to upgrade the lighting within their sports hall to increase lux levels. Working closely with the contractor, Walter Hartley Ltd., Steon Lighting were tasked with designing a high output lighting scheme.

The Sports Hall previously had 4x 55W TCL and 58W T8 linear fluorescents installed. This installation failed to achieve the lux levels required to host sporting competitions (500 lux). Furthermore, the lamps are now considered dated and inefficient technology with lamp maintenance required throughout the lifetime of the product. Maintenance is particularly difficult on the luminaires because of their high-bay position.

Steon Lighting recommended a transition from fluorescent to energy efficient LED solutions. To achieve this, they supplied a number of standard and emergency 6 x 35W Titan XL LED luminaires from their Steon® range.

The luminaire contains high output surface-mount-device (SMD) LEDs. The LEDs last in excess of 50,000 hours compared to the 30,000 hour lifetime on the previous linear fluorescents.
The luminaire also has a self-dissipating heat management system to avoid the LEDs overheating which could in turn lead to a reduced lifetime.

The Contract Pack LED was also installed in parts of the Sports Hall as emergency provision. This is one of our own Steon® branded self-contained emergency luminaires. It has an energy efficient LED light source that is enclosed within a robust IK10 polycarbonate enclosure.

The luminaires are now virtually maintenance free with a minimum 50,000 hour lifetime. Furthermore, despite the increase in lux levels, the new installation will result in reduced energy consumption and subsequently lower energy costs.