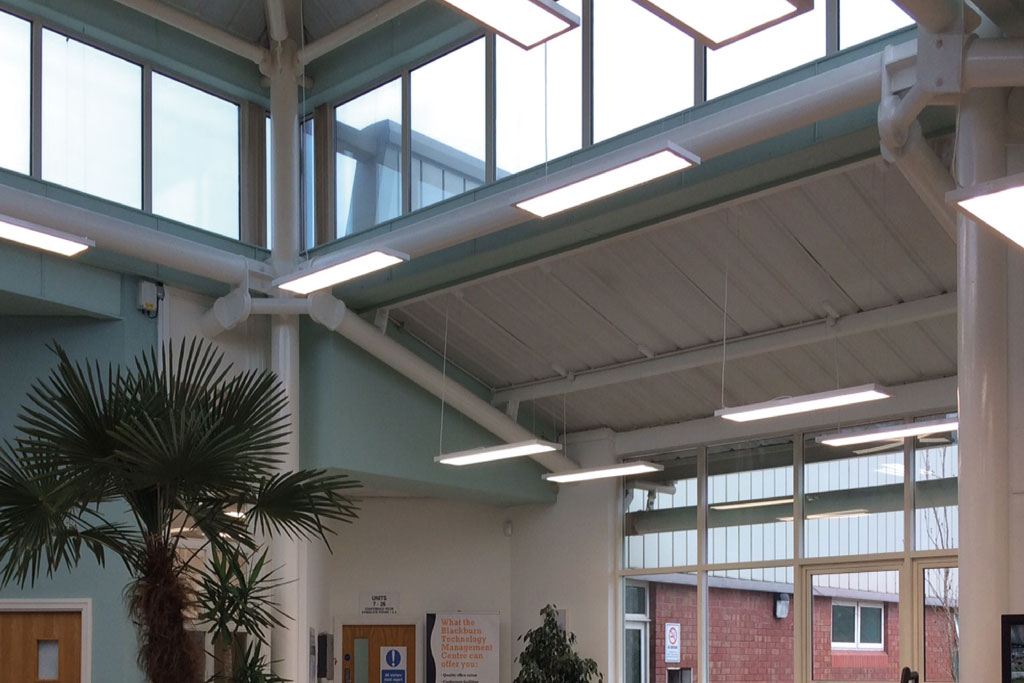 The Blackburn Technology Management Centre is owned and operated by Blackburn with Darwen Borough Council and therefore place much emphasis on supporting small companies and entrepreneurial start-ups. The centre consists of a number of offices which are on offer to small companies at competitive prices.

Blackburn with Darwen Borough Council recognised that the lighting throughout the Technology Management Centre was approaching the end of its serviceable life. In the interest of improving aesthetics and overall lux levels the council approached Steon Lighting to supply LED luminaires for the reception and corridor areas. The council were keen to explore a solution which would require limited maintenance.

For the reception areas and offices Steon supplied suspended linear Zion LED luminaires. These were manufactured with a microprism lens to provide glare control. The Zion has a luminous efficacy of up to 125lm/W and a light source life expectancy of 50,000 hours at L90, which means that after 50,000 hours of operation the luminaire will still retain 90% of its original light output.

Following the smooth completion of the project, the council now have peace of mind that the upgraded LED luminaires are highly reliable and require very little maintenance. Through the use of MIC 1 controls the council have minimised their environmental footprint and as a result can expect to benefit from cost savings.

As a result of the domed Atlas LED, the corridors and offices now benefit from improved light distribution and lux levels. Prior to installing Steon luminaires these areas suffered from poor uniformity and had dark patches on the ceiling.

Since installing the suspended Zion LEDs in the reception, the space has been fully transformed. This area is now much more inviting and the new luminaires have created a more spacious feeling.

The Zion LED has completely transformed and modernised the reception area. Steon’s luminaires have created a welcoming environment which also feels much more spacious.