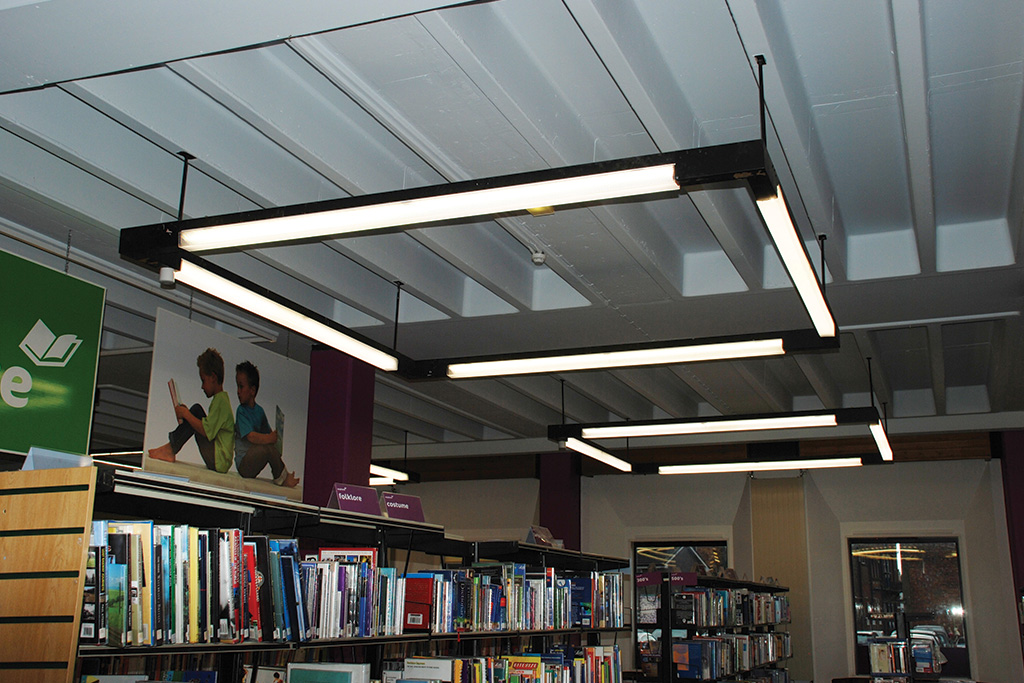 The borough of Wigan is serviced by two central libraries, one of which is Leigh Library built in 1971. The library, is managed by leisure and culture provider WLCT on behalf of Wigan Council -The library continues to service the local community, hosting arts & crafts events, providing IT training services and reading groups for children are examples of the many activities ongoing at the library.

Leigh Library sought to upgrade their lighting scheme due to their existing scheme’s high maintenance and poor efficiency, on their behalf, NPS approached Steon Lighting.

General illumination in the existing scheme was provided by a series of 18 suspended quadrants containing fluorescent light sources, enclosed on each side by a wraparound prismatic lens. The quadrants featured dated technology, notably magnetic control gear with canister starter switches and 2400mm 125W T12 fluorescent tubes. These lamps are no longer readily available, widely regarded as obsolete due to preferable alternatives that have since superseded this technology.

The lumen output from the T12 fluorescent tubes had deteriorated due to age and the quality and distribution of light was poor. The efficiency of the luminaire was also limited by ageing of the lens, which had suffered yellowing due to prolonged UV exposure. The diminished translucency of the lens reduced the luminous intensity of the luminaires and further inhibited their proficiency.

Steon Lighting designed a lighting scheme that utilised the existing frame and incorporated a considerably more energy efficient LED solution. A new retrofit gear tray was designed in SolidWorks CAD to fit inside the frame with two high output linear LED printed circuit boards, delivering up to 138 lumens per Watt, as opposed to the T12’s 78 lumens per Watt. Optimum single bin Osram LEDs were selected to ensure colour batch consistency and minimal variation in the LED performance. The LED quadrants provided a low maintenance and low cost solution for the library as the average LED life is 50,000 hours, which can be extended through dimming. Replacement prismatic lenses were manufactured to maximise lumen output.

The scheme was designed with a dimmable driver to operate in conjunction with a fully addressable DALI microwave photocell. This addition enables the luminaires to dim in accordance with how much ambient day light there is in the environment. This functionality further enhances the energy saving capabilities of this scheme.

The lighting upgrade provided Leigh Library with a lighting scheme which delivers uniform lux levels, due to the daylight sensing functionality, making for a pleasant environment to conduct the many activities the library undertakes, whilst also being compliant with the SLL Code for Lighting. Light levels were recorded before and after the installation on different surfaces at different heights and were found to be significantly higher, by as much as 400% in some instances. The resulting lighting scheme is virtually maintenance free; delivering optimised light distribution and increased energy efficiencies for Leigh Library.