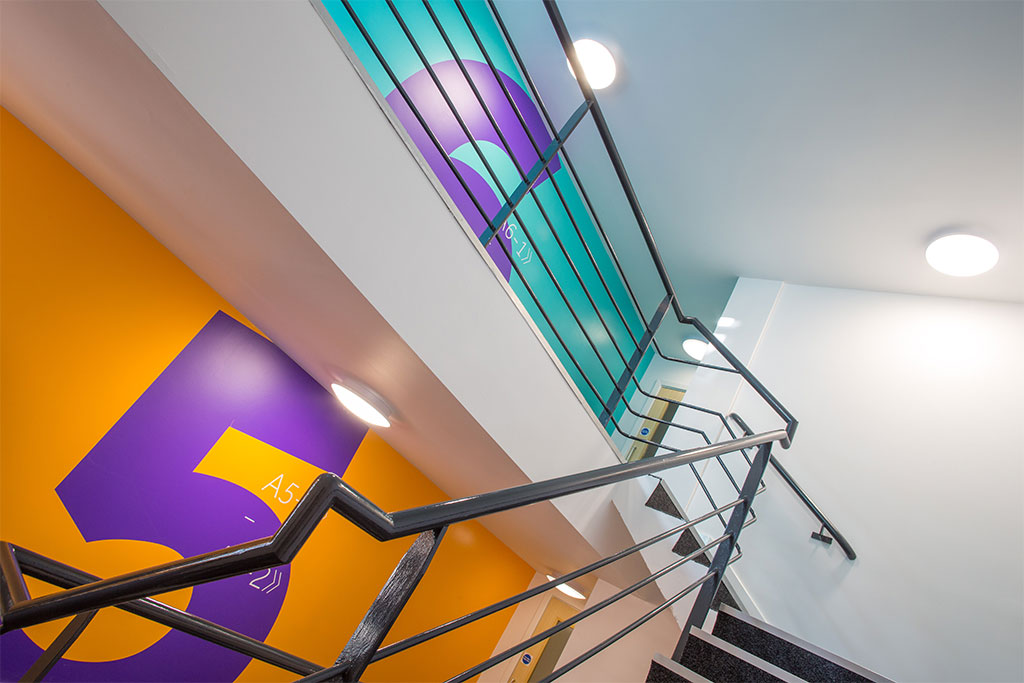 Liberty Living is one of the UK’s largest providers of student accommodation, working with over 30 university partners in 17 cities. They utilise high quality sustainable design which creates accommodation that is very popular to students nationwide.

Liberty Living approached Steon Lighting to redesign the lighting scheme at Sir Charles Groves Hall to create a robust solution for the bedrooms, bathrooms, kitchen, corridors, stairwells and car park. The client wanted to increase the reliability of the lighting, dramatically reduce energy consumption and cut maintenance costs associated with the incumbent fluorescent lighting that remained switched on 24 hours a day.

Steon Lighting supplied the Orbit LED luminaire for application in the bedrooms, corridors and stairwells. Marked under Steon Lighting’s Steon brand, the Orbit is a decorative high performing and energy efficient luminaire. The luminaire is maintenance free with a 50,000 hour LED life.

The surface mounted Circo LED was supplied for the bathrooms. This luminaire has an IP65 rating and is therefore completely dust-tight and protected against water jets.

The Caparo LED was supplied for the kitchen. This features high performing Osram single-bin LEDs. The LEDs are housed inside a slim profile enclosure comprised of a robust Zintec steel body and a high output polycarbonate cloud lens.

They incorporated Manual Intelligent Control (MIC®). This ensures that the right level of light appears at the right place only when required, thus preventing unnecessary energy consumption and reducing maintenance costs.

MIC 2 was chosen as it operated a DIM-ON-DIM basis. It is an ideal control for reducing energy consumptions whilst still providing some level of courtesy illuminance for extra safety.

The existing scheme within the carpark consisted of 75 single and 7 twin 58W T8 linear fluorescents, which were switched on 24 hours a day, 7 days a week. Steon Lighting supplied 67 ceiling mounted Challenger LED luminaires which incorporated MIC 2. The Challenger is robust and non-corrosive. It has a twin LED which is highly efficient and housed under a high output cloud lens. A mixture of standard and emergency luminaires was selected.

Following the smooth completion of the project, energy and carbon savings were confirmed by Sir Charles Groves Hall to be in excess of 75%.

Steon Lighting have continued to work closely with Liberty Living since the completion of the project at Sir Charles Groves Hall. Similar projects have been undertaken in Liverpool, London, Cardiff, Southampton and Newcastle.