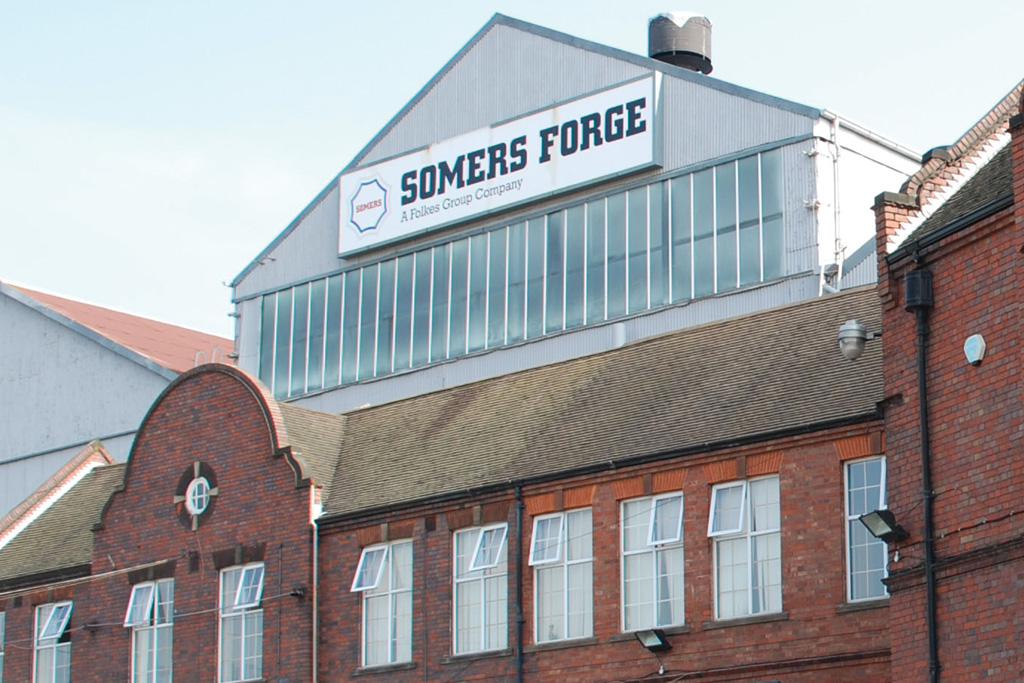 Somers Forge is one of Europe’s leading forging companies producing complex, high integrity forgings across 46 global markets. It has the unique capability to manufacture finished components ready for installation, from as little as 1 kilo to 50 tonnes, working with a variety of materials. With 140 years’ experience in heavy engineering, Somers Forge offers an extensive range of products covering a wide range of industry requirements from its in-house machining facilities at Halesowen in the West Midlands.

Steon Lighting were approached by Somers Forge to redesign the lighting scheme at their Halesowen plant. The existing installation, which dated back to the 1960s, featured 400W high pressure sodium and mercury vapour high bay luminaires that were not controllable and were permanently switched on 24 hours a day, 7 days a week.

As an environmentally responsible organisation, Somers Forge is constantly striving to improve its green credentials and reduce the carbon footprint of its manufacturing facilities. Following a site survey of the operating processes, the Torino DX was chosen to light the main production areas.

The Torino DX is a super-efficient polycarbonate metal halide high bay luminaire, with a power consumption of 320W and a high lamp efficiency of 100 lumens per watt, it outperforms fluorescent alternatives. It features a multi-faceted, highly polished, sealed metallized reflector to prevent any dust and moisture ingress, making it ideal for any harsh damp and dirty operating environment.

The Torino DX contains a high quality, dual-arc lamp with an optimized light spectrum that extends the lamp life to 50,000 hours based on 100% light output, similar to an LED. However, the Torino DX is a much more cost effective long term option as only the lamp would need to be replaced after the 50,000 hours, whereas the whole LED luminaire would need to be replaced after the expiration of the LEDs.

Steon Lighting designed the Torino DX for Somers Forge so that it was fully controllable from ground level for maximum energy savings, avoiding the need for any lifts. It contained dimmable control gear that worked in conjunction with a DALI sensor that was mounted up to 12 metres in height.

The Remote Intelligent Control (RIC) system featured occupancy, lux level and daylight sensing, ensuring that the luminaire would only switch on to 100% output if presence was detected on the footplate of the sensor and if there was insufficient natural daylight. If presence was detected and there was sufficient natural daylight, the light output would be regulated to ensure that a certain lux level would be maintained. If presence was no longer detected, the luminaire would dim down to 30% output, unlike most other metal halide luminaires.

The system was designed for easy installation and maintenance involving a simple plug and socket connection, this ensure minimal production downtime.

Both the light levels and dimming and absence functions were commissioned on site by a Steon Lighting engineer. Each luminaire was individually controlled for maximum energy savings. Within certain zones of the plant such as walkways and exit routes, the minimum light output was set at 50% to comply with health and safety. In the storage bays where high lux levels were not required, the lamps were capped at 70% output to maximize energy savings.

Following a trial installation of 33 luminaires, the energy consumption was monitored and impressive cost and carbon savings had been delivered by the scheme. As a result, a further 200 luminaires were ordered for other operating bays within the plant.