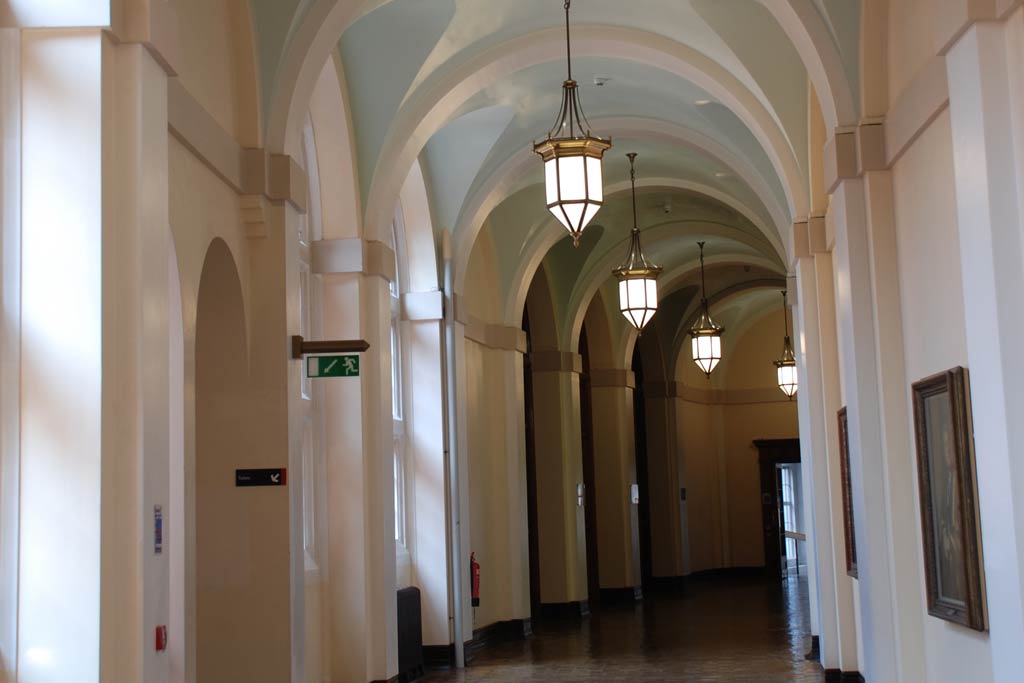 The Aston Webb buildings are located on the main campus of the University of Birmingham in Edgbaston, these buildings were named after one of its visionary architects, Sir Aston Webb. The grade II listed buildings, born out of Victorian aspirations, were built in 1909 in a semi-circular arrangement known as Chancellor’s Court. At the centre of Chancellor’s Court is the Great Hall, an iconic ceremonial building with stately rotunda and magnificent domed roof, used for prestigious university events. Buildings were added at right angles to the east and west of the Great Hall with the large central pavilion denoting the main entrance.

Steon Lighting were invited to collaborate on a replacement lighting design for the main curved corridor, which interconnects the series of formal pavilions by Couch, Perry & Wilkes. The existing scheme featured a large number of switch start compact fluorescent surface ceiling mounted luminaires, which did not reflect the historic and heritage value of the Aston Webb building. The client wanted the lighting in the corridors to mirror the lantern luminaires in the Great Hall. In design terms, the lantern luminaires also needed to carefully reflect the scale and strong geometry of the corridors and be as energy efficient and easy to maintain as possible.

The Steon Lighting design team produced 3D renderings in SolidWorks, which showed what our proposed designs would look like once installed. The handcrafted lanterns featured solid brass castings and spinnings and acid etched glass for the windows. Although the luminaires in the Great Hall used a compact fluorescent light source, it was felt that LEDs represented the most efficient and effective light source for the lanterns as the light colour, output and uniformity were excellent.

Within each standard and emergency luminaire, there were 8 x 16W high efficiency Osram LED compact strips, carefully configured to avoid shadowing; six in the main body, one at the top providing up light and one at the bottom providing down light. The LEDs were run from a DALI system, which was compatible with the building’s existing control management system and gave the client daylight sensing, full dimming function across zones.

Sympathetically replacing lantern luminaires that had been suspended for over 50 years presented a huge challenge for Steon Lighting. However, the company has proved more than capable of meeting that challenge – as the stunning results of the bespoke design shows. Not only do the lanterns capture the spirit of the building through close attention to detail, but the light levels within the corridor have significantly improved. Careful planning with Manstal Electrical ensured that the whole project from inception, design, manufacture and installation ran smoothly.